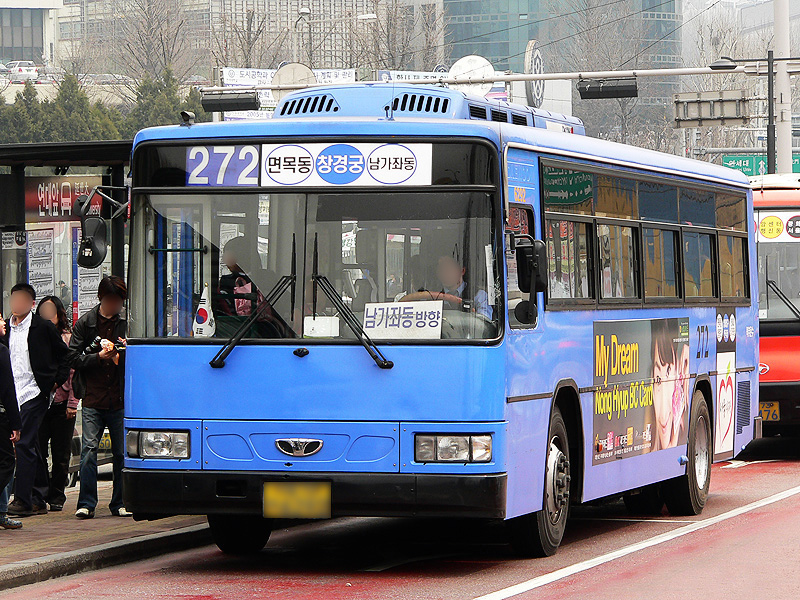 지선버스 (支線버스) connect major areas of a city with each other, and make more stops than 간선버스 but fewer stops than 마을버스. The distance they cover is longer than 간선버스 but shorter than 마을버스 (e.g., 강남 to 잠실, or the NYC equivalent of Harlem to Midtown). In Seoul, these buses are green and regular size.

간선버스 (幹線버스), or "mainline buses" are buses that travel great distances between stops and connect a city's surrounding areas with downtowns (e.g., 혜화 to 신촌, or the NYC equivalent of the Bronx to Wall Street). These buses are blue in Seoul.

광역버스 (廣域버스), or "wide-area buses," are 시외버스 that travel the longest routes, go the fastest between stops, and cover the most distance between stops. They connect neighboring cities with downtown areas of the main city (e.g., 수원 to 강남, or the equivalent of White Plains, NY to Manhattan). These buses are red in Seoul.

고속버스 (or express buses) travel between cities without stops (except rest stops). While passengers line up in the city to take other types of buses, 고속버스 require passengers to go to a bus terminal (고속버스터미널). Tickets can be purchased in advance on the Internet (advance purchase, or 예매), or may also be purchased directly at the bus terminal. The types of 고속버스 are, from least to most luxurious: 일반고속버스, 우등고속버스, 프리미엄고속버스. 일반고속버스 are similar to Greyhound, and 우등고속버스 are similar to US domestic first class on planes. 프리미엄고속버스 have mostly individual seats with select amenities like curtains, outlets, lamps, etc. Express buses in Korea do not have bathrooms, so they stop every two hours or so at highway rest stops.